“Not to be served, but to serve”, a mission that has been handed down from God Himself. Based on the two readings, “The Drum Major Instinct” by Martin Luther King Jr. and “The Lovers of the Poor” by Gwendolyn Brooks, I believe that this mission to serve others is about humility; making others more important than the desires of your own heart. This mission is to humble thyself and put others before thyself. The Bible says in Matthew 20:16 that those who desire or believe themselves to be first in line for rewards, will be the last to receive them and that the ones who are lowly and believe themselves not worthy will be the ones first in line for rewards. I believe this was what Martin Luther King Jr. was saying with his sermon, that like James and John, we all desire to gain the rewards of this life, especially when we think we deserve it, but the point is that those who really deserve it are those who humble themselves and admit that none of us are truly worthy. When we all believe that there is more we can do and also do it without seeking rewards, that’s when the blessings occur.

The Drum Major Instinct teaches me that while it is natural to believe we deserve praise and recognition for things we’ve done, we mustn’t get cocky and believe we should be above or ahead of anyone else; we mustn’t be selfish. The Lovers of the Poor had a different feel to it but it was along the same lines of humbling oneself to help others. It was basically telling us that we must not judge others based on how they look or the status they keep. It was about helping people who appear to be on a lower status than you. The Bible says in Matthew 25:40 that what we do for the least of these, basically other people, is what we have done for the King. That doesn’t mean we will always be in a situation to help the downtrodden, but that doesn’t mean we can’t help people when we perceive that someone could benefit from our service.

I believe serving is letting go of yourself for a moment and opening up to the possibility of others. When we stop focusing on our own lives, we can find peace in helping others with their lives. Serving is humbling oneself and doing what needs to be done to accomplish a sense of self that is worthy to be recognized because you did something for someone else. The only difference is that once you have served someone else, it becomes less about yourself and more about the world. I will not serve to be thanked, but serve to do a good, that’s all the reward I seek.

Welcome to my Blog!

This blog is about seeing the world with truth and not being blinded by the ways of the world.

“I realized my job was to awaken possibility in other people.” Benjamin Zander

“Just when you think you know something, you have to look at it in another way. Even though it may seem silly or wrong, you must try.” Keating/ Dead Poets Society

The test of a first-rate intelligence is the ability to hold two opposed ideas in the mind at the same time, and still retain the ability to function. One should, for example, be able to see that things are hopeless and yet be determined to make them otherwise.” -F. Scott Fitzgerald

“Everything that needs to be said has already been said. But, since no one was listening, everything must be said again.” -Anonymous

“We have much to hope from the flowers.” Sherlock Holmes

"History is a burden; stories can make us fly." Robin Hood/DW 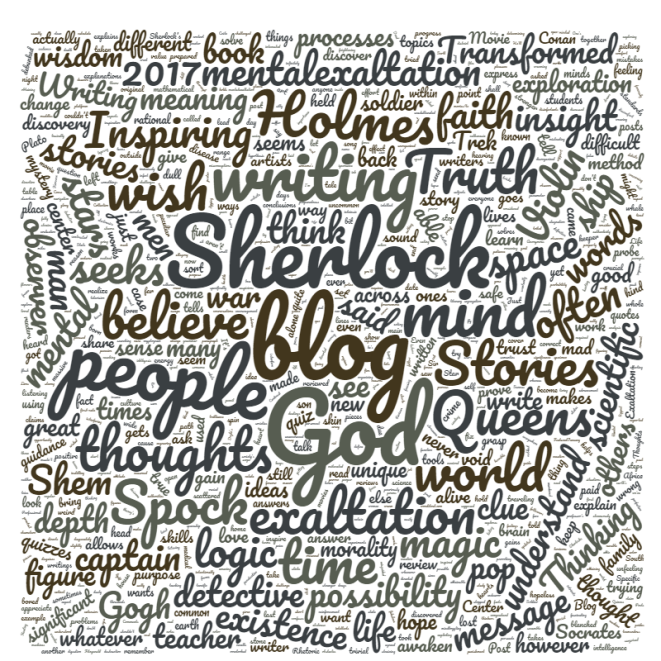 Follow "One's ideas must be as broad as Nature if they are to interpret Nature." Sherlock Holmes on WordPress.com

"The only people for me are the mad ones, the ones who are mad to live, mad to talk, mad to be saved, desirous of everything at the same time, the ones who never yawn or say a common place thing, but burn, burn, burn like fabulous yellow roman candles exploding like spiders across the stars." -Jack Kerovac

“My mind rebels at stagnation. Give me problems, give me work, give me the most abstruse cryptogram, or the most intricate analysis, and I am in my own proper atmosphere. But I abhor the dull routine of existence. I crave for mental exaltation.” ―Arthur Conan Doyle
%d bloggers like this: